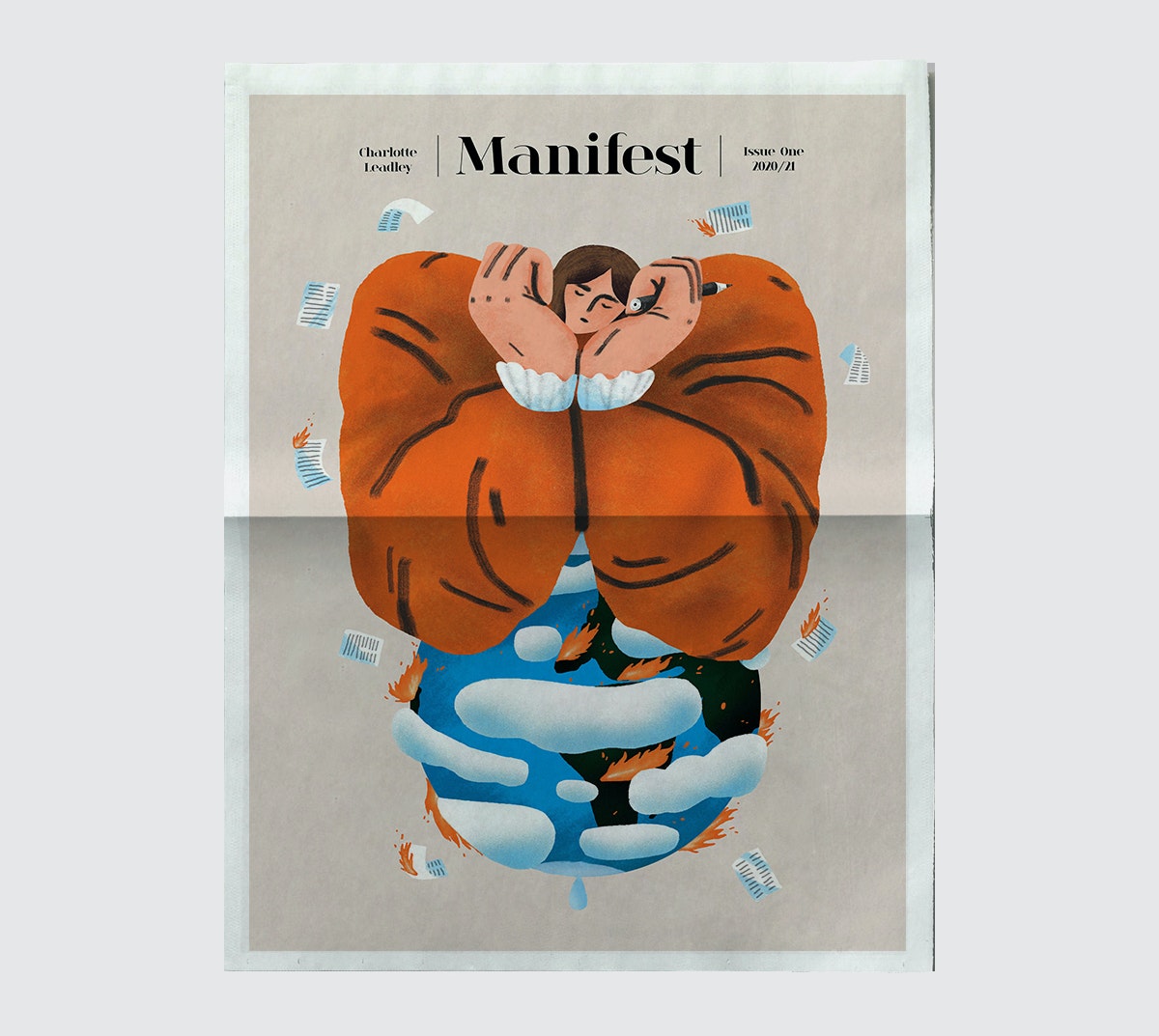 Illustration graduate shortlisted for New Designer of the Year award

Charlotte Leadley, graduate of BA (Hons) Illustration, was shortlisted for the New Designer of the Year award in the Social Impact Design Award category. Sponsored by Creative Conscience, the award focuses on projects that have benefit and impact, improving society for the better.

Charlotte’s final major project ‘Manifest’ was the focus of the New Designer nomination, an illustrated newspaper encapsulating the research and theory behind Charlotte’s practice. Through a combination of text and illustration, Manifest explores the responsibility of illustrators and creatives to use their skills, voice and platform to raise awareness and ignite discussion on global issues that are social, political and/or environmental.

Charlotte, whose work could be described as a playful application of colour, shape and texture said: “The idea behind Manifest all started with my dissertation, titled “The Power of Editorial Illustration: Discussing Environmental, Social and Political issues of the 21st century”, as well as realising what I wanted to be my purpose not only through my work as an illustrator, but also within my life generally.”

“The name itself comes from the word manifesto, with the project a vehicle for me to declare my creative agenda. Manifest as a verb also means ‘to present’ or ‘reveal’, so this worked with presenting my theories and thoughts via the newspaper.”

“I hope to use my artistic voice to create real change in the world, being aware of that power and influence and trying to create a new definition for myself as an ethically responsible illustrator.“

The winners of the awards were announced on 17 September with an online awards ceremony hosted on Facebook, featuring keynote speaker Luke Pearson, one of the founders of Pearson Lloyd, a London based design studio who specialises working with manufacturers, brands and the public to create dynamic design solutions that respond to the challenges of modern day society.

Charlotte said: “It sounds cliche but I was so excited and proud of myself when I found out I was shortlisted. It was a massive boost of motivation and recognition, especially poignant for me after the pandemic resulted in the college and New Designers to be closed. I struggled a lot with motivation at the beginning, but the nomination really felt like a testament to my resilience and work ethic against all the odds faced this year.”

“I hope to use my artistic voice to create real change in the world, being aware of that power and influence and trying to create a new definition for myself as an ethically responsible illustrator."
Charlotte Leadley, BA (Hons) Illustration graduate

Charlotte isn’t the first BA (Hons) Illustration student to be nominated, with alumni Jake Williams winning the New Designer of the Year award back in 2017, with his fully-illustrated non-fiction children’s book ‘Resilient Reptiles’. The book focussed on the unique ways that reptiles of the world have adapted to their environments in order to survive, with the independent panel of judges praising Jake for his “creative approach, style and ambition to tackle difficult subjects thoughtful through the medium of illustration”.

This is also not the first time Charlotte has had success during her time at Plymouth College of Art. Already this year she has been featured as one of the Association of Illustrators Top 10 UK Graduates to Watch in 2020 as well as being part of a three person team who won first place in the Toy category at the Mojo Nation Student Design Challenge at the end of last year.

Charlotte said: “I’ve had so many highlights during my degree, from being Highly Commended in the Macmillan Prize for Illustration in 2019 and exhibiting in London during my second year. Being in the top five shortlist for the New Designer of the Year award is probably the highlight of them all though, such a fantastic way to end my degree and celebrate the success of my project.”

“As for now though, I’m currently celebrating completing my degree and recovering from all the excitement, but I’m working from home and pursuing a career as a freelance illustrator. I’m currently working on commissioned projects and personal work, but looking forward to taking it slow for a while after a very hectic, but fulfilling three years!”