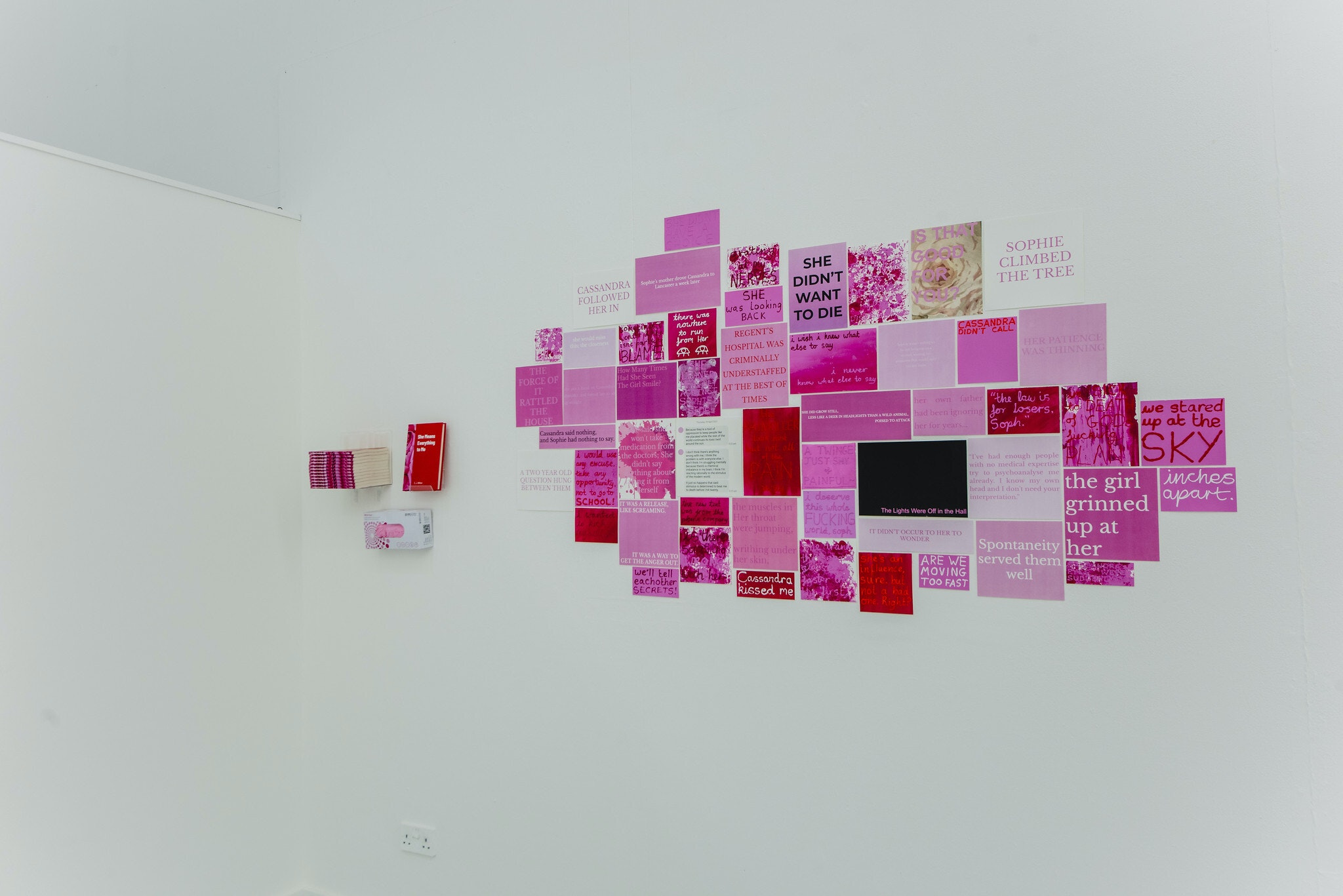 Currently in residency at MIRROR, Maud Craigie’s solo show ‘Indications of Guilt, Pt. 1’ examines the structure of American police interrogation and their relationship to fictional screen representations of law enforcement. While visiting the college, Maud, an artist and researcher who is one of two selected artists for the South West Showcase 2020, took a tour of the BA (Hons) Fine Art Summer Show 2021 at Studio 11, exhibiting from 21 June to 29 June 2021.

It has been a particularly strange year; one in which many of us have had to re-evaluate and reinterpret our working methods. Some commuters have travelled, cocooned from the weather, to makeshift offices in their kitchens, dressed in sweatpants and smart shirts – as if caught halfway through a metamorphosis. Part of the strangeness is the universality of this shift. One inevitable change seems to be the collapse of boundaries between the personal and professional. Facing colleagues and classmates over Zoom, Teams, Google Meet, we are further apart, less able to read each other’s facial expressions and intonation. At the same time, we can’t help revealing more of our lives, more of the spaces we inhabit. We share accidental snatches of the people we live with; family photographs and notes stuck on the fridge; or glimpses of bedside tables, as we set up workspaces in what is often the most private of rooms.

On a day which shifted from sharp rainfall to interludes of grey sunshine, I visited the Plymouth College of Art BA (Hons) Fine Art studios to see the work of the graduating students – for once in person. Many of the students discussed how their methodologies have changed over the past year. Some who previously worked with physical materials have experimented with digital outputs out of necessity; others who previously worked digitally, had become tired of staring at a screen – which now takes up so much of our daily life – and have moved towards creating physical objects.

For many of the students, the home has become a site of enquiry. Familiar objects and familial relationships have been scrutinised and dissected. Dining chairs and tables laid for dinner; a recreation of a teenage bedroom wall; homemade candles and childhood family photographs feature in or inform a number of the works. Similarly, many of the works contain ritualistic tasks: nail painting; knitting; weaving reams of black wool; flattening plastic bottles; poster making; and holographic arms endlessly moving in a loop.

While many of the works are about people, bodies themselves often appear only on the peripheries – like the shadow of a knitting hand. Instead, many of the works focus on the spaces we inhabit, or on the items we use - anthropomorphising furniture; creating participatory events in public spaces; on the discarded waste materials humans leave behind.

Over the last year, we have all been intimately tied to the spaces in which we live. The home has necessarily expanded to become the space in which we do almost everything; our whole lives subsumed by the domestic. The word domestic, relates to the home but also, like domesticated animals, implies a taming and orderliness. Semantic satiation describes the phenomenon of a familiar word, which becomes strange through repetition. As we repeat a well-known word, we can temporarily lose its meaning: the spelling starts to look incorrect, or the sound feels alien in our mouths. As writer and philosopher G.K. Chesterton notes, a word, ‘does not become tame, it becomes wild, by repetition’ (‘The Telegraph Poles’ in Alarms and Discursions, 1910). Like the wildness of a repeated word, many of the works, constructed from domestic materials, disrupt any sense of order. Instead, we are shown the alienation which can develop through intense familiarity.

The home is a site of memory, inextricably linked to the past. A number of the works in the degree show focus on formative childhood and adolescent experiences, both real and imagined, and embody a retro aesthetic. There is a saturated, silent video which depicts scenes of a teenager’s dressing table; there is a dark, fairy-tale-like oil painting, based on a photograph of the artist as a baby; there is an edited record of an uncomfortable family meal, the table settings re-laid within the exhibition space. In one work, bright pink posters of apparently aphoristic phrases cover a wall. On closer reading, the words, which have been extracted from an accompanying semi-autobiographical text, are more disturbing than they initially appear.

One key tenet that separates humans from other animals is our ability to imagine complex futures and to reflect on and learn from the past. In a world that has spent the last year in a kind of stasis, the future has in many ways been put on hold - perhaps making deep investigations into our pasts inevitable. However, the past represented here does not always offer respite from our uncertain futures. Behind the bubble gum pinks, handwritten posters and heart necklaces, there are investigations into past traumas and ambiguous relationships with our homes and our families.

Connection and disconnection seem to be at the heart of many of the works, mirroring the simultaneous distancing and revealing that occurs over Zoom. Disconnection appears through investigations into complex personal and familial relationships; in the physical disconnection of a broken table leg. We are shown connection through happenings and the facilitation of events which enable communities to form; and through the exploration of the interconnectedness of the universe. In one work, three miniature holographic figures circle their arms in an infinite loop. They are positioned in front of a gold curtain, with shallow trays of water refracting sound and rippling into the space. The size of the small figures in relation to our bodies generates a shift in perspective - a sensation of viewing on a macro level. Rather than examining the past, here we step out of time and re-evaluate our present.