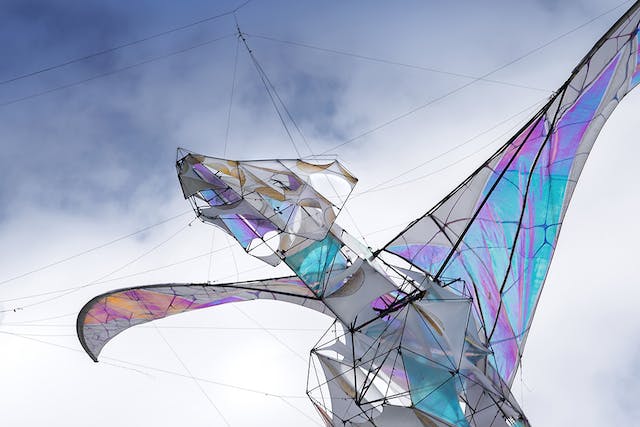 Thursday, 12 August, 2021 — Our BA (Hons) Costume Production students helped create a giant dragon the size of a double decker bus, which is preparing to take flight over the city.

Deep inside the costume workshops at Plymouth College of Art, a mythical beast has been forming.

A giant dragon the size of a double decker bus, with a wingspan of over 20 metres, is preparing to fly over the city of Plymouth. Our BA (Hons) Costume Production students have been working closely with Bristol based Trigger Productions, designing and constructing The Hatchling, the world’s largest human operated puppet to attempt flight, which has garnered widespread national attention.

Working on the team has been Macie Dow, a third year BA (Hons) Costume Production student. She explained what working on such a unique project has taught her. “If you listen carefully and pay close attention you will succeed. I’ve learnt not to be afraid of asking questions as it’s so important to help you become an even stronger team player.”

Senior Lecturer and Subject Leader for BA (Hons) Costume Production Marie Dunaway said the expertise the students has gained by taking part in this project is vital for their professional development, “They worked so hard and gained valuable skills in costume construction, professional practice and working to a deadline with a professional company.” 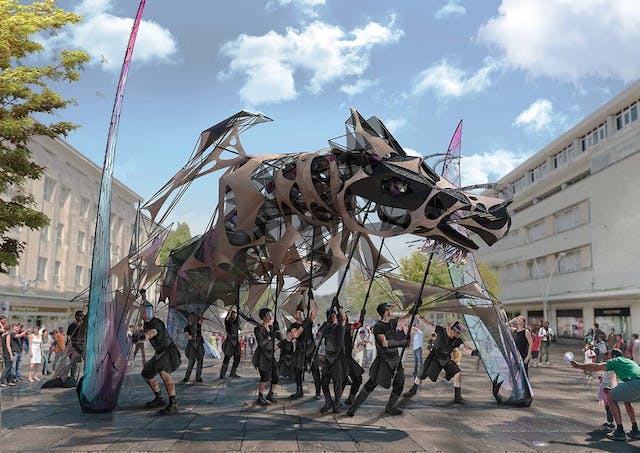 The collaboration brings together artistry and engineering and is brought to life by a team of leading creatives, including Mervyn Millar, part of the original team of the acclaimed stage production War Horse, and Carl Robertshaw, a designer who has created sets for the London 2012 Olympic Ceremonies.

Costume alumni Polly Mitton returned to the college to help make The Hatchling’s egg. “We were working with 33 metres of Lycra - a scale I have never worked on before,” she explains. “Because we were using so much fabric, it took a lot of teamwork, pinning and re-pinning before it started to resemble the shape Carl wanted, but it was so rewarding when we managed it! It was honestly such an amazing experience I can’t stop talking about it.”

The project is the brainchild of Triggers’s Artistic Director Angie Bual and was inspired by the dragon as a global symbol, one found in stories in every ancient culture around the world.

“The Hatchling asks us to celebrate our commonalities over our differences – no matter your heritage or age, everyone has a connection to the dragon. When she flies, it will be a moment for all of us to reflect on freedom of movement, and what that means for each of us. The power of public art has to unify us has never been more important.” 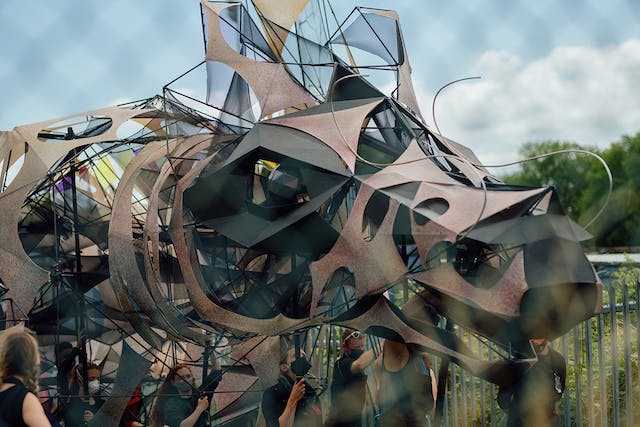 The event will form part of The Mayflower 400 commemorations taking place across the city this summer. An ambitious series of cultural events, Mayflower 400 seeks to expand upon the well known story of the Pilgrim Fathers’ journey setting sail from Plymouth on the Mayflower, with public art and performances like The Hatchling exploring the experiences of those impacted by the consequences of colonisation, and honoring the legacy of the passengers and crew.

“We were working with 33 metres of Lycra - a scale I have never worked on before... it was so rewarding when we managed it! It was honestly such an amazing experience I can’t stop talking about it.”
Polly Mitton, BA (Hons) Costume Production alumna

The Mayflower 400 programme unites 11 core destinations in England with wider local, national and international partners and over 25 million US citizens descended from the Mayflower’s passengers.

The Mayflower 400 events include world-class public art and wider content that will commemorate this exceptional voyage and provide a major ongoing transatlantic impact, knitting together communities, inspiring creativity and culture, driving economic growth, and promoting understanding and education. 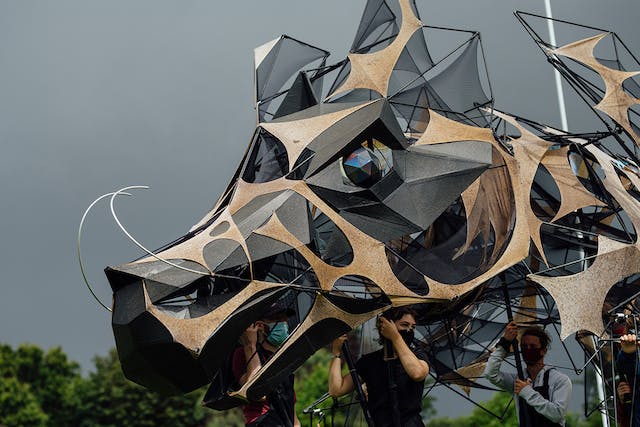 Over the weekend the magical beast will hatch from its egg in Plymouth’s city centre, then learn to walk for the first time, before nesting on Plymouth Hoe on Saturday evening as a local choir and ukulele band sing her to sleep with lullabies.

The next day she will play on the Hoe with a pearl - long associated with dragons in Chinese folklore - before launching herself across Plymouth Sound on Sunday evening, in a bid for freedom. To catch the flight, plan to be on the Hoe on the Sunday evening from 8pm until 10pm.

The dragon has been constructed from super-light carbon fibre, weighing less than a piece of hand luggage, enabling a team of 36 rotating puppeteers to control her. Third year BA (Hons) Costume Production student Masie explains some of the challenges involved in clothing the puppeteers.,

“The hardest part of the project for me was definitely the last day I did, I enjoyed meeting and fitting all of the cast. It was challenging measuring knees for knee pads - it was very difficult but I believe we succeeded in the end!”

The Hatchling’s groundbreaking world premiere and maiden flight will take place in Plymouth on Saturday 28 - Sunday 29 August 2021. And there will be more next summer, as the Hatchling and her baby lead a procession of over 5000 performers through the streets of London, as part of the Platinum Jubilee Pageant.