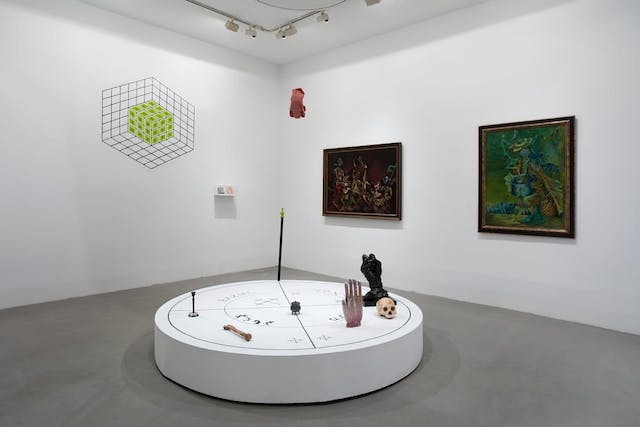 The Postgraduate Centre, as part of the School of Critical + Cultural Studies, presents this series of talks which looks at art practices and histories that encourage debate, exchange and interdisciplinary collaboration, thinking and making.

Jesse Bransford is a New York-based artist whose work is exhibited internationally at venues including The Carnegie Museum of Art, the UCLA Hammer Museum, PS1 Contemporary Art Center at MoMA and the CCA Wattis Museum among others. He holds degrees from the New School for Social Research (BA), Parsons School of Design (BFA) and Columbia University (MFA). An associate professor of art at New York University, Bransford's work has been involved with belief and the visual systems it creates since the 1990s.

Recent work has focused on the folk magic of the Norse traditions, specifically the talismanic stave spells and the seiðr traditions. Parts of this work are collected in the recently published book from Fulgur Press, A Book of Staves (Galdrastafabók). He lectures widely on his work and the topics surrounding his work. He is the co-organizer of the biennial Occult Humanities Conference and an editorial member of the Black Mirror Network.

The talk will be moderated by Judith Noble, Head of Academic Research & Dr Steven Paige, Subject Leader for Postgraduate Studies. This talk will also be recorded, and available for public viewing on our YouTube channel in the coming weeks.

Image above: Installation views of The Emerald Tablet (For the Magic Flute) by Jesse Bransford, 2015, Dimensions variable