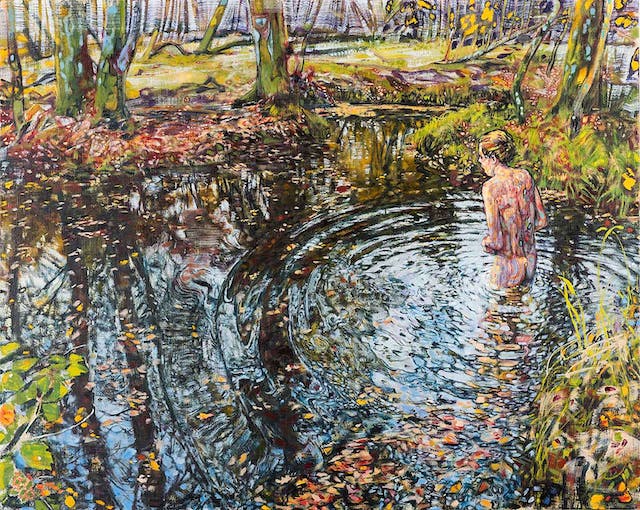 The Postgraduate Centre, as part of the School of Critical + Cultural Studies, presents this series of talks which looks at art practices and histories that encourage debate, exchange and interdisciplinary collaboration, thinking and making.

This week we are pleased to welcome Dominic Shepherd to give a talk. Dominic graduated with MA Painting from Chelsea College of Art and Design, London in 1994, having completed his BA (Hons) Painting at the same college in 1988.

Shepherd is the archetypal contemporary romantic. Working from the woods in Dorset, he is consumed by the nature he finds around him. His work reflects the seasonal changes of his environment and references dream, hallucination, the occult, music and folklore, ultimately presenting a fascinating fusion of personal and universal mythologies. He has exhibited internationally, with an extensive record of group and solo shows in London, New York, Berlin, Los Angeles, Helsinki, Frankfurt, Munich and Miami and is represented by Charlie Smith London.

His most recent solo exhibition, Downstream, was in London in 2019. Dominic is Associate Professor and Programme Leader of MA Painting at Arts University Bournemouth. He is included in, and has written for, various publications as well as delivering papers and lectures on his practice and its concerns. He is also a co-ordinator of the Black Mirror Research Network that explores the influence and role of enchantment and magic in modernist and contemporary art.

The talk will be moderated by Judith Noble, Head of Academic Research & Dr Steven Paige, Subject Leader for Postgraduate Studies.

This talk will also be recorded, and available for public viewing on our YouTube channel in the coming weeks.